Haze
Concrete.
Taxi driver just undercut a police car at speed while switching lanes.
Racing along a suspended highway and slowly realising the grey modern megaliths of the city skyline have encircled us and suddenly we’re entrapped, caught right where they want us, in their metropolitan maw.

I’ve just come back from a wonderful, maybe even life-changing, 3 and a bit days in Shanghai. My first trip to China. I wrote those notes from the taxi, groggy, having just left the airport, nailing it down the Chinese highway.

And now looking back these are the themes I want to remember from the experience.

I had approached with the naive arrogant assumptions of a Westerner used to being at the centre of the world. I expected big web properties, but just with different names. I expected a sweet, developing marketing and digital community, behind but finding its way. I expected to feel knowing and confident, superior even.

What I found was a digital and business landscape moving so rapidly that even though 15 or so local veterans we met and spoke to are struggling to keep up with, even with their resources, their knowledge, their inside relationships and on the ground. I felt inspired, dizzied, shaken and admiring.

It feels like there are major iterations to the digital topology every 6-12 months. ‘Weibo is dead!’ we were told over and again. ‘I go there now and again just to check what’s happening’ one of the guys we met told us. Right now the momentum is particularly with WeChat, a closed, timeline-driven social network owned by TenCent, Sina Weibo’s major competitor. Brands are struggling to figure out what to do and we found the Shanghai agencies and social data players equally perplexed.

This market has been moving much faster than the Western market has. And we were speaking with smart digital veterans – people from companies like Ogilvy, JWT, We Are Social, Porter Novelli, OMD, as well as local outfits like NIM Digital and CIC.

In fact, just as we’d got our head around WeChat being the platform where the action is happening, we were told that mobile app vertical communities feel like the next big thing.

Chatting about the local talent market we heard a phrase that resonated: ‘talent isn’t loyal – life is moving too fast here’. Kinda sums up the speed and spirit of Shanghai. 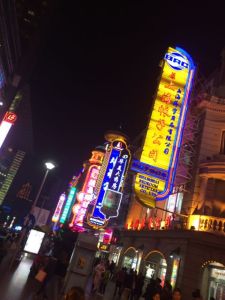 Other differences that stood out:

Whilst Shanghai bustles with the noisy car-horns and weaving scooters and speeding taxis, it also feels very distinct from the outright chaos of say Delhi or Bangkok.

A high percentage of the cars on the road are recognisable global brands – like 80%. And many were Audi, VW, Porsche, Mini, BMW. Quite a jolt, actually. Yes, that’s Shanghai – a wealthy bubble. But even so.

We walked to our first appointment on the second day, 35 minutes through a particularly smoggy morning. And what struck us as we did was how European it felt – like Barclona with wide boulevards lined with short Palm trees, neatly manicured gardens and small public parks with bamboo-shrouded paths and trimmed bushes. And the gawky sci-fi elevated walkway network high above the traffic had sweet, simple hanging plant boxes tracked along its edges.

The streets were cleaner than NYC, although there were patches of sewage-y smelling areas.

Perhaps its the European and international history of the place. Perhaps its the modern pace of innovation and concentration of wealth. But Shanghai doesn’t feel alien or altogether different. It feels like a place of fusion.

The Chinese people we met were open, smart, knowledgeable, interested, savvy. I expected smart but I didn’t expect the transparency, the humour and the generosity we experienced. Preconceptions. Stereotypes.

And in particular the generosity. Our colleague Xinglong was met at the airport but his best friend’s best friend – someone he’d never met before. This friend Edward then drove us around from appointment to appointment for the next two days in his fancy BMW. Utterly humble (he is a successful entrepreneur with a digital business in North America). We were told, ‘it’s the Chinese way’.

The people we met were great. Very impressive.

Shanghai. What a place.

One thought on “Shanghai”